The ruined fort in which may

have been Vortigern’s final stronghold 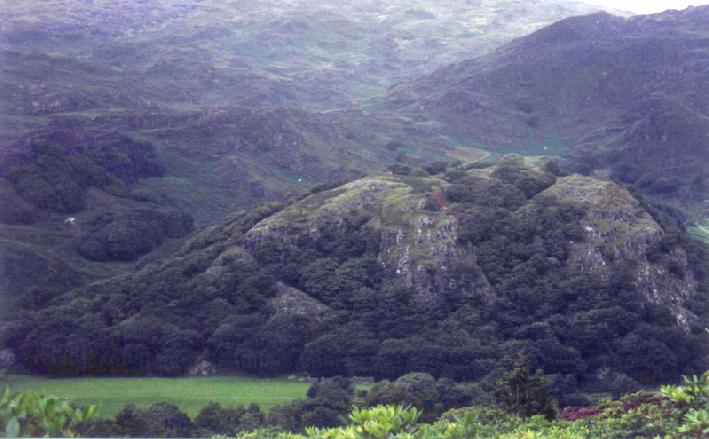 Dinas Emrys The Fort of Merlin

Merlin was originally known as Ambrosius with the

later name Myrddin being based on his place of birth

Caer Myrddin now . Merlinus was a

latinisation which became Merlin. His character may

have been based on more than one person.

Emrys is the Welsh version of Ambrosius hence

Dinas Emrys (The Fort of Merlin) which is said to have

been Vortigern’s stronghold in

The ruined fort of Dinas Emrys lies in the Snowdonian Mountains of North Wales. It is north of the town of Porthmadog. The site has legendary connections to Vortigern . Nennius, a Welsh monk writing circa 800 CE, tells of Vortigern, Merlin, Ambrosius, and the two sleeping dragons (one red and one white) who awoke and fought for the supremacy of . On a more practical level it is said that this was Vortigern’s final stonhold when serously threatened by the Saxons.

The ruins of Dinas Emrys are on top of a craggy hill and may well have been the strongest natural fortress in Gwynedd. The ruins were different from the other forts. There was no circular "banks-and-ditches" layout, and no large central area. The whole area is very rocky, and there were remains of several structures, at least one of which is Roman. There were two prominent foundations remaining, each with walls several feet high

The pool of the Vortigern story is there today, a rectangle dug during the first century CE. It is difficult to determine the dimensions because of the tall grasses growing in it.

The association of Vortigern with Dinas Emrys is strengthened by the discovery of Tintagel pottery during excavations, which is indicative of a certain degree of prosperity in 400-600 AD.