King Arthur’s Round Table at the 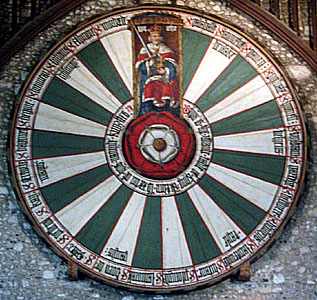 Impressive, looks the part, a “must see” if you visit Winchester and has been used in support of Winchester’s claim to have been Camelot. Unfortunately it probably date back only to the twelfth or thirteenth century and may have been made for a pageant. It was repainted during the reign of Henry VIII who claimed descent from King Arthur.

The names of the 24 knights are written around the edge of the 18 foot diameter table, weighing 2649lbs, surmounted by King Arthur on his throne.The inscription is in Middle English and not an old Celtic language

The first written accounts of the Arthurian story appeared in 1130 in Geoffrey of Monmouth's 'History of the Kings of Britain', which maintains that Merlin had the 15-year-old Arthur crowned at nearby Silchester but there is no mention of any round table.

The first mention of the Round Table comes a few years later in Robert Wace's Roman de Brut (1155), which says that Arthur seated his knights at a round table so that all should be equal.

In Thomas Malory's Morte D'Arthur, the table is a wedding gift to Arthur from Guinevere's father, Leodegrance.

The inscription round the centre of the Table and the names of the knights round the margin appear as follow:

Another possible candidate for the Round Table is the Roman Ampitheatre at Caerleon in Gwent, . This is not actually a table but rather a circular meeting place. It certainly existed during the late fifth century.